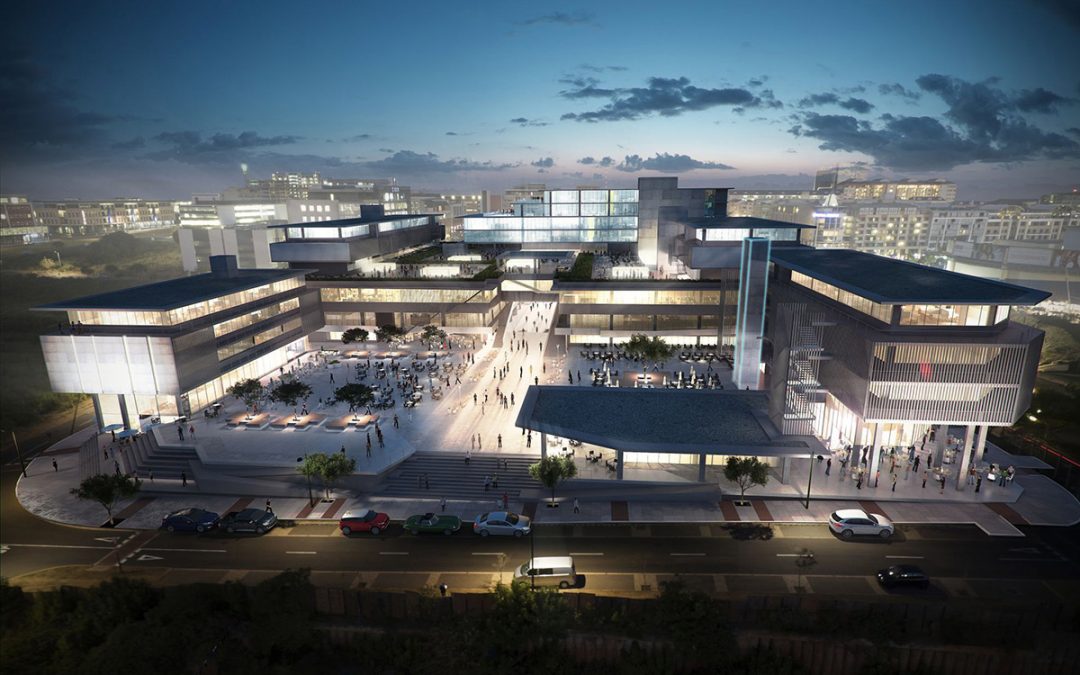 uMhlanga’s most significant new commercial and retail development is just seven months away from opening. Construction on the R1billion Park Square commenced in October 2016 and is due to open in November this year, according to Ken Reynolds, Director of Nedport Developments, the developers. Adjacent to the uMhlanga Ridge Town Centre’s popular Chris Saunders Park and featuring 40 000 square metres of premium commercial and retail offerings, Park Square will be the first combined commercial and lifestyle development of its kind to come on stream on the Ridge in recent times. It’s also set to offer investors a sound investment opportunity.

Availability of premium commercial space in the Precinct is dwindling. Malcolm St. Clair, General Manager of the Ridge Management Associations says, “the developable topography in this Precinct is fully sold out with only two remaining oval sites left in the uMhlanga Ridge Town Centre. This is testament to the demand for premium mixed-used commercial space and the value proposition created by Tongaat Hulett Developments and maintained by Ridge Management. Investing in Park Square is therefore certain to translate into an attractive capital investment since the development offers a combined lifestyle and business experience in this already thriving economic hub.”

In this vein, investors looking for a solid commercial investment opportunity can look no further than Park Square. According to the JLL Market Study published in the last quarter of 2017, even though growth has stabilised, commercial property continues to outperform other asset classes. The imminent completion of the nearby N2 bridge will improve traffic congestion and provide a new conduit for the Go! Durban Integrated Rapid Public Transport Network. These links will further reinforce uMhlanga’s strength as a world-class commercial hub and Park Square’s viability as an accessible and convenient lifestyle, commercial and retail destination.

Already 70% complete, the Green Star-rated development boasts 36 000 square metres of premium P and A-grade office space, 4 000 square metres of retail and 3 500 square metres of open, public space. As a one-of-a-kind business-style campus, the development sets the benchmark not only as a highly attractive commercial investment opportunity in a prime location, but also seeks to holistically integrate professionals’ work and personal needs. The urban-inspired space’s lifestyle offerings and connection to the Chris Saunders Park will also attract nearby communities including the expanding neighbouring suburbs of uMhlanga, Prestondale and the sought after residential communities of Izinga and Izinga Ridge.

Reynolds comments further saying, “Add in Park Square’s accessibility and location and we have a place where business owners and investors will benefit from high foot traffic, communities will benefit from its convenient lifestyle amenities and professionals will benefit from working in a connected and vibrant space. It really is a win-win situation for everyone.”

Uptake on the commercial and retail components has been positive with approximately 18 000 square metres already let to Nedbank. Nedbank’s Head: GBS Property Services Group Finance, Howard Rauff reaffirmed the development’s advantages saying, “Nedbank had a requirement to consolidate into one campus site in the uMhlanga area. The Park Square development offered us the opportunity of having the financial contact centre on a single floor, which is a critical success factor for running a key operation of this nature. This development is well located in a park-like environment, being close to the uMhlanga transportation hub and easy access to a variety of amenities for the staff right on the campus.” Other confirmed tenants include but are not limited to Spar, International Bank Vaults (IBV) and Mozambik Restaurant.

Reynold concludes, “Park Square is an authentic, future-forward place that combines a connected and convenient work culture with a strong lifestyle and leisure offering around an open public square. Its ability to seamlessly integrate these two fundamental aspects of life in an attractive space will make a lasting positive professional and social impact on the people who work here and those who live nearby. Its status as a place to gather further underpins its appeal as an exceptional commercial investment opportunity with an innovative work environment combined with attractive lifestyle and retail amenities.”